This was another merciless July. After ten in the morning Raisa could no longer bear to be in the sun for more than a few minutes at a time. She had loved heat once, but in this town summer felt like trying to breathe with your face pressed into moist cotton. The blinds were down everywhere in the house, which made the atmosphere just about bearable. But there was no hope of being productive today. If only she could focus enough to read.

Raisa went to the bookshelves that stretched across one side of her living room and stared at them impatiently, as though they owed her a tale that would suit her attention span. A novella, maybe. A book of poems, but small poems. Riddles, or epigrams. Her fingers landed on a collection of stories by Cortázar, translated into her language. They came in small gulps, brief incantations of clocks and axolotls that didn’t ask too much of her, only that she give up something of herself to those letters on the page, decorated with squiggles unknown to the original Spanish. She read half the book like this, all the while unconsciously running her fingers through her hair to get the knots out. When she went briefly into the sunlight to take a late lunch, she noticed that her fingerprints were stained with black ink.

At two in the afternoon, heavy with heat and her belly full, Raisa started dreaming of a nap. A magnetic pull drew her back to the shelves. She was too tired to finish the volume she had started, but a strange ferment kept her scanning the uneven spines. One of them, one of them held the answer to a question she did not yet know. If she found the answer, she might find the question too, and that would solve so much.

The book she went to bed with was a cheap paperback with a snippet from a nineteenth century painting of a young man wearing a turban on its cover and a black mark marring its pages at the bottom. The spine was well cracked. Raisa had read it at least once before. It was hard to tell how many times she had read it since the novel spanned so many centuries Raisa thought she had been living in it her whole life. She began to wonder if she was really born in her own century, or if she, too, had lived life after life, so many adventures piled on top of each other that it was hard to remember them all. Did she appear when her mother gave birth to her, in her new and already forgotten country, or did she begin with the oldest story she had ever read?

Raisa had taken off her clothes to make lying in bed bearable, and for a moment she lifted the thin sheet sticking to her body to see if she still had the breasts she was accustomed to. They were there, they were there, still flatter than she might like, maybe even flatter than before. Raisa scraped a fingernail across her chest, expecting to see it filled with sweat and dead skin, but all that came off was dust.

By the time evening fell Raisa had lost track of the hour. In the fridge there was a half-bottle of fizzy pink wine and a few vegetables that promised relief from the day’s lingering warmth, but Raisa ate dry crackers and returned to her living room. Her eyes hurt, and her back felt as if someone had bent her carelessly before tossing her aside. Now she knew exactly what she wanted. It was a thick brick, its orange cover already warped from old moisture, with a rough line drawing of nude women and men and bulls its only embellishment. This was the kind of book she bought with the best intentions, but if she was honest with herself, its power lay more in being there, keeping its place on the shelf, than in being read.

Raisa did not want to read any more. What she wanted to do was let her eyes slip from the left pages, with their stately lines of ancient verse, to the equally labyrinthine German translation on the right. Raisa leafed through her memory to an evening many years earlier, when she ate a large slice of hash cake and picked up a book of old poetry to see if she could still decode it. Before her eyes, the words moved around to accommodate her, they seemed to hold hands so that she would know which belonged with which. But now there was no clarity, just the sensation of swimming among these marks on the page, miming their sounds with her lips as she went, briefly losing one only to brush against another. There were fabula and forma and flamma, and the longer Raisa spent floating among them the less she could tell if they were separate or one everlasting word, flowing unbidden from shape to shape.

It was around three in the morning, and though this was the time when Raisa usually felt most awake, she could not keep her papery eyelids from closing. Had she eaten at all today? She could not remember. She looked down at the skin of her hands, which looked whiter than she knew it, and for a moment she had the feeling that her flesh took up almost no space at all. It was so cool now in her house that she could finally sleep, but her bed was too empty. She would need a small and narrow place among her friends where she could slumber for an eternity, or at least until some restless person called to her. With a rustling sigh, Raisa shut herself and slipped onto the shelf. 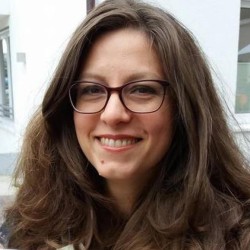 Irina Dumitrescu
Irina Dumitrescu wrote a book about medieval campus novels and called it The Experience of Education in Anglo-Saxon Literature (Cambridge, 2018). She asked people how to survive catastrophe and collected their voices in Rumba Under Fire: The Arts of Survival from West Point to Delhi (Punctum, 2016). Irina likes to write essays but her time is spent and they keep getting shorter. It seemed the right thing to reflect on this too, so she edited, with Bruce Holsinger, a special issue of New Literary History titled In Brief. Everything she writes is absolutely true.